Posted at 06:21h in News by scotthouston 42 Comments 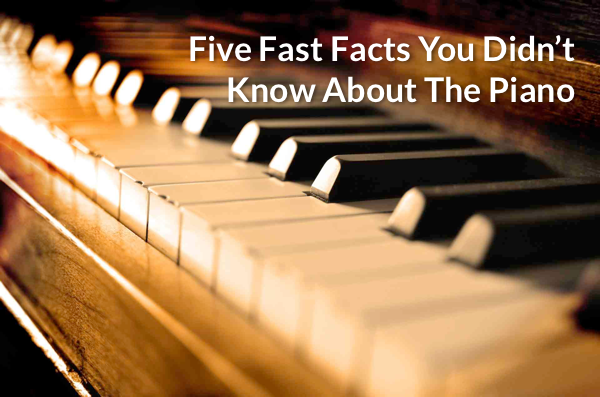 Learn some fun facts about the piano that are sure to help you impress your friends the next time you hang out!

In a world where technology and information is at the tip of your fingers, it feels like people value fast information and trivia more than ever.

However, there’s still a lack of piano related trivia floating around on the internet. Fear no more, I’ve crafted a list of fun, little-known facts about the piano.

Whether you consider yourself a piano playing newbie or expert, I’d be surprised if you knew all these fun piano playing facts. Read on to learn some fun facts you can use to impress your family and friends or simply to gain a little more info about an instrument we all love—the piano!

1) The World’s Longest Piano Piece Is….

Looking for a new way to motivate your children to complete their chores? Consider offering them the option of cleaning the bathrooms or having them sit through a rendition of Erik Satie’s (1893) “Vexations.”

If you were to sit down and play this piece completely it would take you over 18 hours to complete. The full piece was recently performed in New York City by a team of 10 pianists. They actually took turns playing throughout the performance.

By the end of the concert, only a few critics  remained and several of the remaining audience members had fallen asleep, but one critic shouted “Encore!” (Which is one of the funniest things I’ve heard in a long time… My kind of humor. Hilarious!)

2) What Does Tin Pan Alley Have To Do With The Piano?

Believe it or not, Tin Pan Alley’s name was actually derived from the piano. Tin Pan Alley describes an area in New York City around 28th Street and Fifth Avenue where long ago many music publishers set up shop to produce piano sheet music.

Musicians would audition for publishers by playing their new songs. Tin Pan Alley was a lively place. Day and night, passersby could hear musicians pounding away on cheap pianos. The old pianos sounded like someone was beating on an old  tin pan. Thus, Tin Pan Alley’s name was born.

So, don’t forget to tune your piano twice a year if you don’t want your neighbors to coin your home, the new Tin Pan Alley!

Check out Tin Pan Alley in its heyday!

That’s right, a piano can match the lowest note of a double bassoon to above the top note of a piccolo. So go to a piano concert to save money, you’ll be hearing the same note range, anyways!


5) Come One, Come All, Gaze Upon The World’s Largest Piano

Right now you’re looking at a Challen Concert Grand. It’s one of the world’s largest grand pianos and spans a total of eleven feet. It weighs a ton … No literally, it weighs over a ton. This giant has a total string tension of over 30 tons. I don’t know about you, but I would imagine that our childhood storybook character, Chicken Little, would be more afraid of this piano falling from the sky, than the sky itself!

I hope you enjoyed these fun facts, and learned a few things you can take to your friends!

Hey, while you’re here, don’t just learn fun facts about the piano, learn how to actually play the piano today…

Try Piano In A Flash for free!